Finally after months of training my alt took comfortable sit in her brand new Orca! 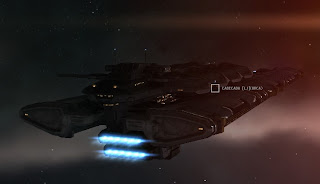 I had buy order up on the market for last month but eventually I had to just buy it from a sell order for 420 mln. Anyway after dragging her 18 jumps from Torrinos I loaded he cargo maintenance ship with my rusty boats and took her for a spin. Not having any experience with cargo maintenance bay, I parked Orca in safe spot and will be using her for a few days as a remote station and not warping her into missions just yet.

First victim of my new setup was one brave missioner in a Prophecy. He didn't even try to run from my Hurricane, but charged me instead. He was quickly put in his place and I even managed to save small group of Gallente Marines whom he tried to imprison.

It was getting late and my last scan of the evening revealed Abaddon whose pilot clearly had too much money and not enough brains. He promptly shot my Vigil and waited patiently for my return, I wasn't going to disappoint him and returned few seconds later in Hurricane. His cap was quickly drained, drones killed and when I made sure his lasers are unable to hit me, I opened convo.

He was rich and he was greedy and he shot me first so I wasnt going to let him go anyway but I wanted a ransom. Unfortunately it took me few seconds too long to kill all NPC's and his Abaddon popped like a firecracker. Opening his wreck was a real pleasure, dropped loot paid for my newly acquired Orca and there was still small change left!

I have to admit, there are small problems like not being able to dock your ship if you have a cargo in cargo bay so you have to store it in corp hangar or jettison it before swapping ships but those are really minor issues and benefits of having Orca are undeniably great.
Posted by Qintes at 09:02