Bastards alliance has eventually permanently relocated to Ishomilken. Our new home is a bit more lively than quiet corner of universe that is Auner. There is a few pirate corps in our neighbourhood and alot more passers by. This move certainly reinvigorated our alliance and we have started branching out and reaching for new challenges ahead. In addition to our usual small gang frigate roams, which we continue >>> open roams every Monday 19:00 game time, join DBastards channel in game  <<< shameless plug right here,  we had a session of training in stealth bombers and few good scraps in larger ships.

We have had few decent fights with a guy calling himself Blood ofGODS. He has a POS in Ishomilken and likes to fly flash ships on multiple alts. He also seems to be keen to escalate fights and is not afraid to pull out an odd capital ship.

Fight kicked off after we have caught Blood alt in Rapier on Large PLEX in Ishomilken. After some cat and mouse play Blood warped in Archon and Moros on the field to defend his Hurricane. Despite advantage of initially having numbers Bastards situation was not that great. We knew Blood called for reinforcements, and his setup of Moros, Archon and webbing Hurricane was deadly for our ships. Our capital pilots werent online so Nash called to Shadow Cartel reinforcements. SC had some Ishtars about 13 jumps from Ishomilken and decided to take it easy and go through gates.

It took us forever to kill his Hurricane, Bastards were bleeding ships and to our despair Blood reinforcement in form of Fearless Empire kitchen sink fleet arrived on the field. At some point it looked like our efforts to keep Moros and Archon tackled were all in vein.

Fortunately for us Blood had his Archon in siege mode and with SC Ishtar fleet 3 jumps away from Ishomilken Bastards made last ditch effort to stop him from warping away to safety. When Ishtars landed both Archon and Moros were still tackled in Large PLEX. Blood support quickly vanished when they saw 20 Ishtars with logi backup landing in the middle of the battle. For a while we kept Moros tackled but due to lack of consistent comunication between us and SC he managed to slip up from our grasp. There was no saving for Archon, left alone on the field made for a small supernova and left pretty wreck. 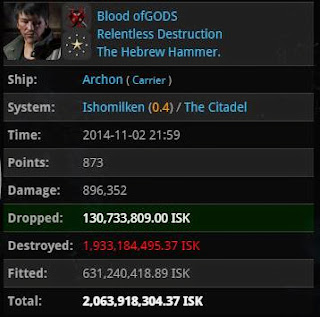 Despite clearly winning ISK war we have in fact lost more ships including Maelstorm, 2 Hurricanes, my Scythe Fleet Issue and a number of frigates. But on the positive note we had a good fight and looted the field which offset some of the loses.